This is a family run property. They are very kind and went above and beyond at breakfast to make sure all was okay. Very friendly and provided recommendations for old town, and restaurants, beach just across the road from hotel...

The rooms are very clean and spacious, the beds comfortable, the staff extremely kind and welcoming. Toiletries and slippers are provided. The breakfast is buffet style - exceptional. There is free parking too.

City Walls - were built in the reign of Anastasius I and enclosed one of the greatest strongholds of the Balkans. The medieval town of c. 150 ha lay within this circuit. We know from historical sources that in front of the walls there was once a moat and that access to the city was by means of a drawbridge. Free access.

Amphitheater - with a capacity of 15,000 spectators is one of the largest in the Balkans. Its diameter must have been more than 120 meters. It is one of the biggest and most exquisite monuments that have survived from the ancient city. It was built in the 2nd century AD. The gladiatorial and wild beast fights were suppressed in the 4th century; in the 7th century a Christian mortuary chapel with wall-mosaics, dedicated to Saint Asti, the first Bishop and martyr of Durres, was constructed in one of the galleries and the arena became a cemetery.

Roman Thermal Baths - were discovered on 1962. The baths have a hypocaust or heating system and a pool, 7m long by 5m wide. Free access.

Byzantine Forum - was built in the city centre between the 5th and 7th centuries AD. The paved area is 39m in diameter, and is paved in marble. In the middle of this circular space there was probably a statue of the emperor. Free access.

Archaeological Museum - situated near the sea. It houses the largest archaeological collection in Albania. In its display cases are items of the Classical, Hellenistic, Roman, late antique and early medieval periods found in Durres and its surroundings.
Address: Rruga Taulantia, tel. +355 52 22253. Open Daily, 09:00–15:00, closed on Mondays.

Ethnographic Museum - is next to the amphitheater, in a historic house of the second half of the 19th century. Traditional costumes and other craft items from Durrës and its neighborhood are on display.

Villa Balani is located 1 minute from the sea. Airport Mother Tereza is 35Km, Center of the city 3.2 Km, Port 1.9Km. 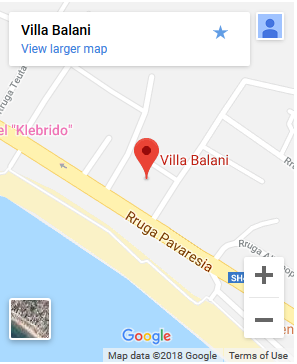 Get explosive offers straight to your inbox and win a free weekend stay!